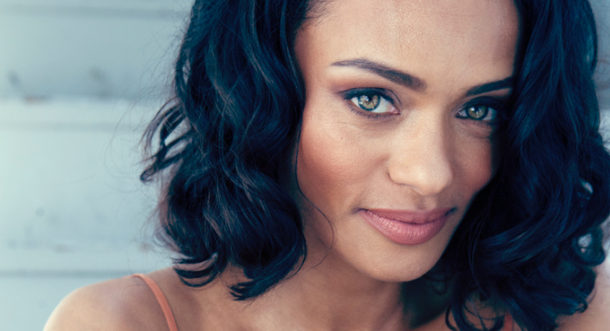 After Aaron Douglas has broken the first ground with Battlestar Galactica, we stay true to the series: Kandyse McClure best known as Anastasia Dualla is coming to FedCon 27.

Multitalented, philanthropist, South African born actress, Kandyse McClure immigrated to Canada at a young age. It was during her debut theatre performance a few years later of Athol Fugard’s Valley Song that she was discovered by renowned Canadian actor director William B. Davis. McClure went on to star in many notable films and television series including: Stephen King’s Children of the Corn, ‘Sue Snell’ in the remake of Stephen King’s Carrie, ’Elizabeth Munroe’ on Showtime’s Jeremiah, NBC’s psychological drama series Persons Unknown, Fox Family’s teen drama Higher Ground alongside Hayden Christenson. From 2003 to 2009 McClure played ‘Anastasia Dualla’ on the SciFi Channel’s Emmy Award-winning “Battlestar Galactica” and in 2012 returned to the small screen alongside Bill Skarsgard, Famke Janssen (X-MEN), Lili Taylor (Six Feet Under) and Dougray Scott (EVER AFTER) in Netflix’s highly anticipated new original goth horror television series Hemlock Grove from executive producer Eli Roth. Kandyse starred alongside Nick Jonas, Paul Sorvino and Isabel Lucas in the Troika pictures production Careful What You Wish For in 2015. She could be seen in Supernatural as ‘Sheriff Tyson’ and plays ‘Landis Barker’ in Ghost Wars.

Kandyse remains connected and inspired by the culture in which she was raised and in the one she now finds herself immersed in as she travels between North America, South Africa and the Caribbean.