Salty Dog is a Touching Tale (Trinidad and Tobago)

What happens when someone is forced to leave their home and their natural environment for unfamiliar surroundings? This is one of the major themes of the short film and drama/comedy Salty Dog, written and directed by Oliver Milne. I was privileged to view an advanced screening of the film and here is my non-spoiler review: 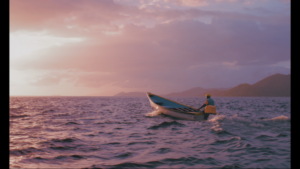 The central character is Mortimer or Mort (veteran actor Errol Roberts), a boatman who had been living down the islands (small islands off of Trinidad) but due to unfortunate circumstances has to leave. His only option is to move in with his estranged son Darian (the multi-talented Nickolai Salcedo) and his wife Zoe (South African-born Canadian actress Kandyse McClure) in their upscale city home.

Firstly Salty Dog is a gorgeous film and features some lovely cinematography. The idyllic scenes of Mort out on the wide open sea are skillfully intercut with the sterile, confined house scenes. There is one shot that goes from the open ocean to a swimming pool that was striking. Both visually and through Roberts’ engaging performance you empathise with Mort’s fish out of water experience. His discomfort leads to some comedic dialogue but there is always an undercurrent of melancholy. He does not want to be there and they do not want him to be there and the theme of how we treat the elderly is portrayed poignantly. 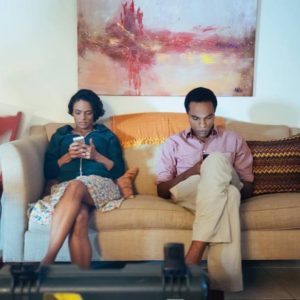 McClure, whose acting I have enjoyed since her days on acclaimed science fiction series Battlestar Galactica, is effortless in the role of Zoe who is the calm and cheery mediator between father and son. And speaking of his son Salcedo gives an intense performance as the frustrated and bitter Darian, who has been carrying some deep hurts for a long time. There are moments when Salcedo does feel a bit more theatre than film but it is fleeting. There is also somewhat of an exposition dump but it is not too bad. I will not spoil where the story goes but I will say that I enjoyed the ending.

Salty Dog is a beautifully shot short with great performances and a moving story that deserves being explored.